££ METAL DETECTING FINDS FROM THE U.K ££

METAL DETECTING FINDS FROM THE U.K

Paul Barford on the wrong side of the law

Paul Barford serial blogger and saviour of world heritage, makes regular accusations about historic sites being pillaged throughout the western world. He cites on his blog the Staffordshire Hoard site being visited by nighthawks as unfilled holes have been found across the field, and criticizes the security measures being taken.

What he fails to tell his viewers, is that he is often the instigator of many of these visits as last year he published on his blog the site of the Poulton Hoard. He even ran a guessing game as to which field it was found, guiding them to the particular field. He then congratulates too local lads who were also known nighthawks at guessing the exact spot. Well done Mr. Barford aren't we a clever chappie. Three months later these two nighthawks were caught by the gamekeeper on the hoard field detecting and digging holes. They were ordered off and the details passed onto the local police.

Now what Paul Barford has done as aider and abettor of a crime is become liable himself, even though he didn't actually hawk the fields himself, his intention was to purposefully assist, or otherwise promote the commission of a crime or a tort.
In a criminal offence, a person who aids and abets in a crime, participates in the commission of the crime by performing some overt act or by giving advice or encouragement. The person should be sharing the criminal intent of the person who actually commits the crime. However, it is not necessary for the aider and abettor to be physically present at the scene of the crime, or take part in the actual criminal offence. Under criminal law, an aider and abettor party to a crime will be criminally liable as a principal, an accessory before the fact, or an accessory after the fact

I think it's only right that the World see's what a real shit you are Paul, and it is you that has broken the law, and I intend to pursue you as long as it takes.
Posted by paul barford at 09:12 No comments:

This is a great song, and really does Paul Barford proud.

http://www.youtube.com/watch?v=upUVEleE_OQ
Posted by paul barford at 02:34 No comments:

I would just like to congratulate Steve on his wonderful new detecting forum http://www.portableantiquitiessociety.com/apps/auth/

I think it's a great idea to build a new detecting forum, where great minds can come together and discuss various detecting topics.
Posted by paul barford at 11:19 No comments: 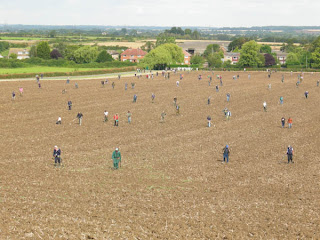 Bravo, Bravo, Bravo,
I must congratulate the B.B.C on a wonderful series Britain’s Secret Treasures. I was utterly gob smacked as each night brought us more and more incredible artefacts found by the general public. These people are our National Hero’s as they go out week after week in all weathers searching for our lost heritage.
The British museum is now overflowing with such wonderful finds such as the Staffordshire Hoard, which will bring in many millions, as they market the find around the World.

It’s a great achievement to secure such a find for the Nation, and paying so little for it.
Posted by paul barford at 14:14 No comments:

As a historian and art dealer I find it very worrying that our heritage is being eroded at such a rate. Before long Britain and the rest of the World will be void of any ancient artefacts as most will be held in the secure vaults of the various museums, never to be seen again. It would be far better if some of these objects stayed in private collections, where they could seen and displayed by all.
I know I’ve harked on about what I feel is wrong with our system for far too long, and have now realised the errors of my ways. Firstly metal detecting has been a significant factor in rescuing many of our lost treasures, and with modern farming methods much would have been lost forever. We can only admire the success of http://www.ukdfd.co.uk/ for their contribution to record our knowledge of our past, and promote high standards in recording. Archaeologist who look at the past through rose tinted spectacles, need to adapt to modern methods and become more cost effective, by employing many of those faceless people who have helped find Britain’s lost past.
Posted by paul barford at 15:00 No comments:

paul barford
My names Paul Barford, I studied at Warsaw University after moving to Poland in 1994